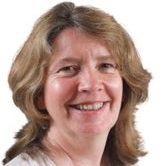 Professor Anne Trefethen is Professor of Scientific Computing and Associate Director of the Oxford E-Research Centre. She previously served as the Centre's Director. On 1 March she was appointed to the new post of Chief Information Officer. She also co-directs the new Institute for the Future of Computing, which is part of the James Martin 21st Century School.

Professor Trefethen is currently taking forward the work that she has been overseeing as ICT Central Coordination Programme lead since July 2011, through to completion of the transition to the new department. In her new role, she has responsibility for the management and future development of the new integrated central ICT department, and will also take forward the development of policy and strategy for ICT across Oxford.

At the Oxford e-Research Centre she works to enable and facilitate interdisciplinary research. Her own research interests include creating accessibility to complex computing systems through high-level languages and multi-touch technology, and extreme computing with a focus on energy-aware algorithms.

Anne has worked for almost 20 years in industry and academia with a focus on numerical algorithms and software, computational science and high-performance computing. She was VP for research and development at NAG Ltd, developing a range of scientific, statistical and high performance libraries, Associate Director for Scientific Computational Support at the Cornell Theory Center and previously a research scientist at both the Theory Centre and Thinking Machines Corporation.