Senior Lecturer at Faculty of Philosophy, University of Cambridge 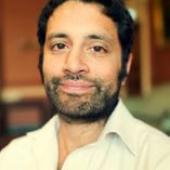 Arif Ahmed is a Senior Lecturer at the Faculty of Philosophy, University of Cambridge. His work primarily focuses on decision theory and the work of the philosopher Ludwig Wittgenstein. He is also interested in religion, and has taken part in multiple public debates on religion and atheism with figures including Tariq Ramadan, William Lane Craig, and Rowan Williams.