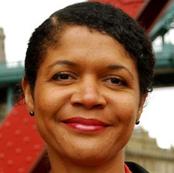 Chi Onwurah is a shadow Cabinet Office minister with responsibility for social enterprise. Until January 2013, she was part of the shadow ministerial team for business, innovation and skills. She became Newcastle's first black MP in the 2010 election.

She attended Kenton School before studying Electrical Engineering, graduating from Imperial College in 1987. Ms Onwurah worked in hardware and software management, product management, market development and strategy for a variety of companies in the UK, France, US, Nigeria, and Denmark. She also has an MBA from Manchester Business School and has Chartered Engineer status.

From 2004 - 2010, Chi was responsibille for technology stategy and analysis for the telecommunications sector - including broadband, internet and systems - and for leading Ofcom's technology strategy in the international domain, particularly standardisation and EC policy.

Chi was involved in the Anti Apartheid movement, on the national executive of ACTSA. More recently she has joined the Advisory Board of the Open University Business School.