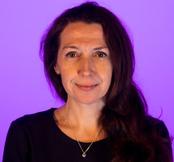 Chloe Squires is the Director General for Homeland Security in the Home Office. Prior to this appointment, she was Director National Security in the Home Office (from May 2019) and led on a range of national security issues including aspects of Counter Terrorism, the domestic response to Hostile State Activity, implementation of the UK’s Investigatory Powers Act and associated oversight mechanisms, the operational relationship with MI5 and the use of national security related immigration and disruption powers.

After graduating with a degree in History from Oxford University, Chloe joined the UK Civil Service Fast Stream. She has spent most of her career working in the national security sphere on both domestic and international issues including stints in the FCDO and Cabinet Office. Amongst other areas she has led on NATO, national security legislation and compliance and crisis management.

Cyber Security has been a theme throughout Chloe’s career, having jointly authored the UK’s first Cyber Security Strategy. She has since worked as both Director Cyber in the FCDO and as Director of Strategy, as part of the team who set up the UK’s National Cyber Security Centre in 2016 in GCHQ.