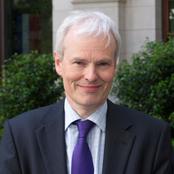 Creon Butler joined Chatham House from the Cabinet Office where he served as director for international economic affairs in the National Security Secretariat and G7/G20 ‘sous sherpa’, advising on global policy issues such as climate change, natural resource security, global health threats and the future of the international economic architecture.

Prior to that, Creon was Director of the Economic Group at the National Security Secretariat. Previously he has held roles as Director of Analysis at DExEU, and Senior Adviser (International and EU) at HM Treasury. At the Treasury he advised the Chancellor and HMT's Managing Director, International (the UK "Finance Deputy") on international macroeconomic and financial issues. He advised on the eurozone sovereign debt crisis; the French G20 Presidency's work on global macroeconomic policy co-ordination (the "Framework for Strong, Sustainable and Balanced Growth") and reform of the international monetary system (including global financial safety nets); and the UK's Economic and Financial Dialogues with China and India. He also led the Treasury's contribution to Gordon Brown's review of the future role of the International Financial Institutions ("Chair's Review") presented to the G20 Pittsburgh Summit.

Before being seconded to HM Treasury from the Foreign and Commonwealth Office, Creon was Minister and Deputy High Commissioner in New Delhi (2006-9). His responsibilities included leading the High Commission's work on the global economic crisis (including India's role in the G20), preparations for the Copenhagen Climate Change Summit, and overseeing UK-India bilateral relations. From 2004 to 2006 he was Director of Economic Policy and Chief Economic Adviser, advising the Foreign Secretary on international economic policy (including EMU and the "five tests", development of the international financial architecture and future of the UK's export credits regime), and leading FCO policy and logistical preparations for the UK's G8 Presidency in 2005 (main themes: Africa and Climate Change). From 1999 to 2004 he was Head of the Economic Policy Department and Chief Economic Adviser. Earlier in his career he worked for the Bank of England, including periods as Head of the Monetary Instruments and Markets Division and Principal Private Secretary to the Deputy Governor. He holds an MSc in Econometrics and Mathematical Economics and a BSc in Economics from the London School of Economics.

Creon's goal for his Policy Fellowship was to understand better the opportunities and risks which developments in science and technology pose for the future shape of the UK economy, and the UK's relative position in the global economy - and given this, to be in a better position to think through how UK domestic and international economic policy needs to adapt in response.