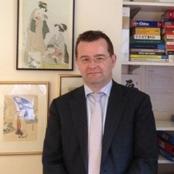 Dr David Jarvis is a College Lecturer in History and the Director of International Programmes at Pembroke College Cambridge. He is an historian of twentieth century Conservatism, with a particular interest in the inter-war period. His published work addresses how the Conservative party after 1918 adapted to the emergence of a mass Labour party and a dramatically expanded electorate. Several of his articles focus on the specific challenge of appealing to the new female electorate.

The International Programmes at Pembroke deliver high quality short-term programmes which offer British and international students an unrivalled opportunity to live and study in a Cambridge college. Prior to taking up his post at Pembroke Dr Jarvis served as Senior Tutor at two Cambridge Colleges, firstly at Wolfson College (2004–2009) and then Murray Edwards College (2009–2014).