Head of Data Rights at Department for Digital, Culture, Media and Sport (DCMS) 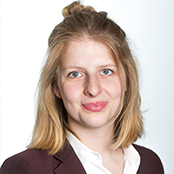 Isabelle De Pauw leads data subject rights and Al policy development in the Department for Digital, Culture, Media and Sport {DCMS} where she advises the DCMS Ministers on options for data protection legislative reform. She is one of the authors of the DCMS Data: A new direction consultation.

Prior to this role, Isabelle worked in the DCMS International Strategy unit where she delivered a newly established bilateral emerging technology dialogue with the White House Office for Science and Technology Policy

{OSTP}. Prior to DCMS, Isabelle was a Trade Officer at the Embassy of Belgium, brokering routes to market for Belgian tech and creative industries ventures. Before moving to the UK, Isabelle worked in the cultural sector in Belgium.

Isabelle holds a degree in English and Dutch literature from the University of Antwerp, and a Master's degree in European Studies from KU Leuven.