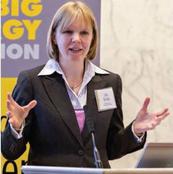 Jane Rumble has been Head of FCO's Polar Regions Department since January 2007, previously having spent three and a half years as Deputy Head.

Jane started her civil service career in the Department of Environment, where she undertook a range of environmental and corporate policy roles, including on health and safety and genetically modified crops. In 2000, Jane moved to the cross-Whitehall Teenage Pregnancy Unit, as a local government and environmental adviser; taking on a broader spectrum of public health policy responsibilities as the Unit merged into the Department of Health.

A geographer by background, Jane is a Fellow of the Royal Geographical Society. Jane merged her environmental and social policy interests in joining FCO to work on polar policy in 2003. She is the fourth Head of the FCO’s polar brief since 1943.