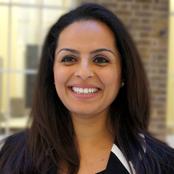 Dr Jasdeep Sandhu is a trained neuroscientist, obtaining her PhD from the Institute of Psychiatry at King’s College London in 2007. Her research expertise includes acute and chronic diseases of the brain, neuroimaging and neuroprotective therapies.

In 2010, Jasdeep joined the UK Government Office for Science, holding key science and policy advisory roles, and supporting the Government Chief Scientific Adviser (GCSA) in all aspects of his work in advising the Prime Minister and senior Government officials on scientific issues of national and international importance. During her time at GO-Science she conducted the GCSA’s Science and Engineering Assurance Reviews of central Government departments, including reviews of the Department for Business, Innovation and Skills (BIS), the Department for International Development (DfID) and the Department of Energy and Climate Change (DECC).

Jasdeep’s current role helps DfID to be more systematic in demonstrating the evidence of the Department's impact on global poverty reduction through rigorous research, evaluation and active engagement with policy makers.

To read about Jasdeep's experience as a Policy Fellow in Cambridge see here.