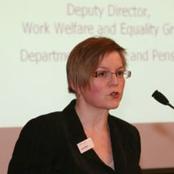 Jenny Dibden became Co-Director, Cities and Local Growth Unit in 2019. Previously, she was Director, Science, Research and Innovation at BEIS. She is also head of the Government Social Research Service.

Jenny Dibden joined the civil service in 1988 as a Social Science Research Officer, and since then has worked in variety of analyst, policy and operational posts. In 2010 she became Joint Head of the Government Social Research Service (GSR), in which role she sits on the Heads of Analysis Group, chaired by the Treasury’s Permanent Secretary and made up of the heads of all the analytical professions. (The government analytical professions - i.e. the GSR, the Economic Service, the Statistical Service, the Operational Research Service and Science & Engineering - exist to enable government to be an intelligent producer, purchaser and user of evidence, helping to ensure that the government is informed by robust, relevant and high quality research and advice, appropriately interpreted for those developing and implementing policy.)