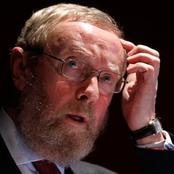 Sir John Beddington is Professor of Applied Population Biology and Honorary Principal Research Fellow at Imperial College London. His main research interests are the application of biological and economic analysis to problems of Natural Resource Management.

Throughout 2008 and 2009 Sir John raised the concept of the “Perfect Storm” of food, energy and water security in the context of climate change, gaining considerable media attention and raising this as a priority in the UK and internationally.

Sir John has previously been advisor to a number of UK Government departments including the Foreign and Commonwealth Office, the Department for Environment, Food and Rural Affairs, the Ministry of Defence and the Cabinet Office. He has also advised several Governments and international bodies including the Australian, New Zealand and US Governments, the European Commission, the United Nations Environment Programme and Food and Agriculture Organisation.

He was, for six years, a member of the Natural Environment Research Council. In June 1997 he was awarded the Heidelberg Award for Environmental Excellence, in 2001 he became a Fellow of the Royal Society. In 2004 he was awarded the Companion of the Order of St Michael and St George by Her Majesty the Queen and in June 2010 was awarded a knighthood in the Queen’s Birthday Honours.