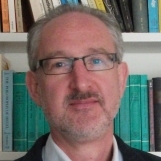 Dr Jonathan Chaplin is the first Director of the Kirby Laing Institute for Christian Ethics, a position he took up in September 2006. He is Member of the Divinity Faculty at the University of Cambridge, and was Visiting Lecturer at the VU University, Amsterdam from 2007-2011. He is a specialist in Christian political thought, and has authored or edited nine books and reports, and many articles, in this field.

From 1999-2006 he served as Associate Professor of Political Theory at the Institute for Christian Studies, Toronto, holding the Dooyeweerd Chair in Social and Political Philosophy from 2004-6, and acting as Academic Dean from 2005-6. From 1990-1997 he was Tutor in Politics at Plater College in Oxford, and from 1997-8, Fellow in Christian Political Thought at Sarum College, Salisbury. In 2006 he was appointed Senior Fellow of the think-tank Cardus in Hamilton, Ontario, and writes regularly for Cardus’s online journal, Comment. He is a consultant researcher for the UK think-tank Theos and has written for Guardian CiF Belief.

Dr Chaplin read PPE at Pembroke College, Oxford, received an MPhil in Political Theory from ICS and a PhD from London School of Economics and Political Science. He has served on the board or advisory councils of several organisations working on the relationship between Christian faith and public life, including the Movement for Christian Democracy, Citizens for Public Justice (Canada), the Social Action Commission of the Evangelical Fellowship of Canada, the theology committee of the Canadian Ecumenical Jubilee Committee, and the Civitas Program of the Center for Public Justice (USA).

Dr Chaplin is also involved in the Energy@Cambridge Strategic Research Initiative, an SRI which links the activities of around 300 academics working in energy research, at all career levels and across 24 departments and faculties.