CEO at The Wildlife Trusts 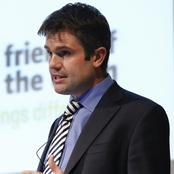 Craig Bennett is Chief Executive Officer (CEO) of The Wildlife Trusts, and was previously CEO of Friends of the Earth. He is an Honorary Professor of Sustainability and Innovation at Alliance Manchester Business School, University of Manchester.

He has been described as “one of the country’s top environmental campaigners”, and by The Guardian as “the very model of a modern eco-general”. He was recently listed as one of the UK’s top “social media CEOs”.

Craig started as CEO of Friends of the Earth in 2015, following five years as Director of Policy and Campaigns. Under Craig's leadership, Friends of the Earth has led the fight against fracking and for the reversal of bee population decline, and campaigned for clean air. As CEO he is shaping Friends of the Earth up as an organisation fit to fight the environmental challenges of the new century, with a focus on grass-roots campaigning.

Prior to this, Craig was Deputy Director at the University of Cambridge Institute for Sustainability Leadership, and Director of the Prince of Wales’s Corporate Leaders Group on Climate Change (from 2007 to 2010), where he built the group into one of the most influential and progressive business voices in the international climate debate.

He maintains his links with the University of Cambridge, as Policy Fellow at CSaP, and as a Senior Associate at the Cambridge Institute for Sustainability Leadership (CISL). He has twenty years' experience of designing and contributing to executive eduction programmes at numerous universities and business schools, including the Cambridge Judge Business School, London Business School, and Duke CE. In 2016, following his well-received Grigor Mcclelland Annual Lecture, he was appointed Honorary Professor in Sustainability and Innovation at Alliance Manchester Business School.

Craig is Chair of the Sustainability and Resilience customer challenge panel for the Anglian Water region (established as part of the OFWAT price review process) and was formerly a member of the Net Positive Board Advisory Panel for Kingfisher plc. From 2013-2015, he was Chair of the Board of Stakeholder Forum.

Craig regularly appears in the broadcast media, and has had many articles printed in national newspapers such as The Guardian, The Independent and Huffington Post. He is a regular columnist and a member of the advisory board for the website BusinessGreen.