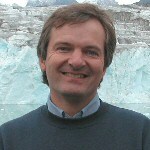 Professor Julian Dowdeswell is the Director of the Scott Polar Research Institute at the University of Cambridge. He is also Professor of Physical Geography within the University's Department of Geography. His research interests include: the dynamics of large ice masses and their response to climate change; the application of airborne and satellite geophysical techniques in glaciology; and processes and patterns of sedimentation in glacier-influenced marine environments.

He has worked, on the ice and from airborne platforms, in a number of areas of the Arctic, including Svalbard, Russian Franz Josef Land and Severnaya Zemlya, Iceland, East Greenland and Baffin, Devon and Ellesmere Islands in Arctic Canada. He has also undertaken many periods of work on icebreaking research vessels in the Norwegian-Greenland Sea, in the fjords and on the continental shelves of Svalbard and Greenland, and in Antarctic

Professor Dowdeswell has been awarded the Polar Medal by Her Majesty the Queen for 'outstanding contributions to glacier geophysics' and has also received the Founder's Medal (2008) and the Gill Memorial Award (1998) from the Royal Geographical Society.