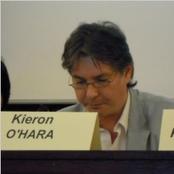 Dr Kieron O'Hara is a senior research fellow in Electronics and Computer Science at the University of Southampton. His interests are in the philosophy, sociology and politics of technology, particularly the World Wide Web and the Semantic Web; key themes are trust, transparency, privacy and the use of technology to support human memory.

He has had a central involvement in the development of the discipline of Web Science. He is the author of several books, including: 'Plato and the Internet' (2002); 'Trust: From Socrates to Spin' (2004); 'inequality.com: Power, Poverty and the Digital Divide' (2006, with David Stevens); and 'The Spy in the Coffee Machine: The End of Privacy As We Know It' (2008, with Nigel Shadbolt), as well as 'A Framework for Web Science' (2006, with Tim Berners-Lee et al), for the journal 'Foundations and Trends in Web Science'.

He has also written extensively on British politics and political theory, and is a research fellow for the Centre for Policy Studies, and a research fellow with CONCEPT: the Nottingham Centre for Normative Political Theory. He writes frequently for popular journals and newspapers, has appeared several times on radio and television, and regularly blogs for the Centre for Policy Studies. His latest book is 'Huxley: A Beginner's Guide' (2012), and he is currently engaged in writing about online religious extremism. He chairs the transparency sector panel for crime and criminal justice for the Ministry of Justice and the Home Office. His report on privacy in the context of the UK government's transparency programme, 'Transparent Government, Not Transparent Citizens', was published in September 2011.

He obtained an MA in Philosophy and then an MPhil in Logic and Metaphysics, both from the University of St Andrews, before going to Oxford to do his MSc in Computation and DPhil in Literae Humaniores.