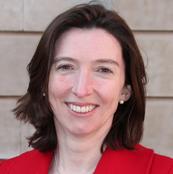 Lindy Cameron became Chief Executive Officer of the National Cyber Security Centre, the UK’s principal technical authority on cyber security, in October 2020. Her role includes overseeing the organisation’s response to hundreds of cyber incidents each year, improving the cyber resilience of the UK’s critical national infrastructure, identifying the risks and opportunities for the UK in emerging technologies and leading the NCSC’s ongoing response to the coronavirus pandemic.

Previously, Lindy was Director General for the Northern Ireland Office, and (before that) Director General for Country Programmes at Department for International Development (DFID). Her earlier roles at DFID included governance specialist in Nigeria, Vietnam and the Balkans; head of DFID’s country offices in Iraq and Afghanistan; secondments to the Cabinet Office (covering Africa, Trade, Development and International Institutions) and Foreign Office (as Head of the Helmand Provincial Reconstruction Team and NATO Senior Civilian for Regional Command South West); Head of the Middle East and North Africa Department; Director of the Stabilisation Unit; and Director Middle East, Humanitarian and Conflict.

Lindy was born in Northern Ireland. She has a BA in Modern History from Oxford, a Masters in Law and Diplomacy from the Fletcher School at Tufts University in the US, and studied at the UK Defence Academy.