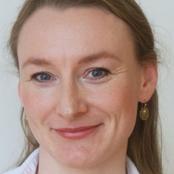 Marianne Guldbrandsen is Strategy Director of the healthcare communicatons agency Cuttsy+Cuttsy. She was previously Head of Innovation & Strategic Partnerships at Macmillan Cancer Support. Some of her Macmillan projects included creating new ways to help young cancer sufferers, such as those in their 20s and 30s, who may feel isolated and unsure of next steps after recovering from treatment. Solutions included developing apps, or putting them in touch with a team of volunteers who have been trained to offer support to a younger age group.

Marianne holds a PhD in Design and Innovation, and has previously worked for a host of organisations including the Department of Health and Innovate UK, and has also worked as an innovation consultant for various sectors including automotive, FMCG (fast moving consumer goods), mobile phones and entertainment.

Before joining Macmillan Marianne was Head of Design Strategy at the Design Council. She has worked on projects including those aimed at support dementia patients, and improving A&E experiences, and has given talks on her work at venues such as the Royal College of Art, and the Design Academy at Eindhoven. She is also a Visiting Faculty member of the Copenhagen Institute of Interaction Design.