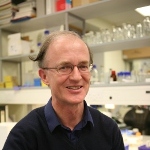 Professor Peter Leadlay joined the Department of Biochemistry in 1979. In addition to his University commitments, he is the co-founder and Non-Executive director of the Cambridge based biotechnology company Biotica.

Peter has concentrated his research around Polyketides, a large and diverse class of natural products, including clinically useful drugs such as the antibiotic Erythromycin A and the immunosuppressant Rapamycin, along with anti-parasitic and anticancer drugs. These molecules are synthesised on large multi-enzyme assemblies (PKSs), of which many of the gene clusters have been sequenced.

The Leadlay Group is investigating the molecular genetics, regulation, enzymology, chemistry and directed evolution of polyketide antibiotic biosynthesis. Their current projects include, altering the DNA sequence of the genes coding for the polyketide synthases, in order to produce novel and potentially therapeutic analogues of important polyketide drugs. They are also researching novel ways of identifying the intracellular protein targets of such polyketide drugs and toxins.

In addition they are carrying out detailed functional analysis of a large number of novel PKS clusters to gain deeper understanding of the potential of these systems for synthetic biology. Through their collaboration with the Stewart Cole group at the Institut Pasteur in Paris, they have analysed PKSs that produce mycolactone, a highly toxic polyketide implicated in Buruli ulcer disease, which they hope will lead to more effective therapies.

Peter is a recipient of various awards including the American Chemical Society Remsen Award in 2006, a Chaire Internationale de Recherche “Blaise Pascal” from 2003 to 2004, and the Smets Chair at Louvain/Leuven in 2009; and he was elected a Fellow of the Royal Society in 2000.