Chief Information Officer at Department for Work and Pensions (DWP) 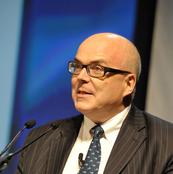 Until his untimely death in December 2012, Philip Langsdale was an experienced Chief Information Officer with significant expertise in delivering results in the public and private sector. He is much missed and fondly remembered by all who worked with him at the Centre for Science and Policy.

Philip had become CIO at the Department for Work and Pensions in September 2012. In his previous role as Chief Information Officer of BAA, he was responsible for technology development and operations for Heathrow, Stansted and other airports, and in particular for delivering a transformational strategy for Heathrow which establishes the concept of the "Real Time Airport".

Philip was also the owner and Managing Partner of Cornish Crabbers, a small boat building business based in Rock, Cornwall. He also served on the Board of e-Skills UK and was on the Board of the UK Hydrographic Office from 2007 to 2011.

Before his move to BAA, Philip was Managing Partner of Langsdale Crook, a consultancy business providing advice at Board level on the use of technology to deliver transformational business change, and before that Chief Executive of BBC Technology, reporting directly to the Director General and responsible for the delivery of all internet, broadcast and IT services; for the management of the BBC's relationship with strategic distributors; and for the direction of all BBC research activity in its research and development facility at Kingswood Warren. In this role he created and drove the BBC's strategy for the digital age, and led the introduction of Freeview.

Philip held an MA in Mathematics, First Class, from King's College Cambridge, was a Sloan Fellow of London Business School and held an MSc in Economics from University College London. He was a Fellow of the Institution of Engineering and Technology (where he was also a Member of the Communications Sector Panel from 2002 to 2006).