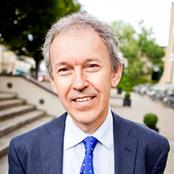 Richard Andrews became Professor in Education at the University of Edinburgh in October 2019.

He has a long-standing interest in education, rhetoric, poetics, argumentation, linguistics and literature, and is the author or editor of numerous books including A Theory of Rhetoric (Routledge, 2014), A Prosody of Free Verse: Explorations in Rhythm (Routledge, 2016) and Multimodality, Poetry and Poetics (Routledge, 2018). He is co-editor of the 2nd edition of the Handbook of E-Learning Research (Sage, 2016) and of CUP’s Cambridge School Shakespeare (with Vicki Wienand) which is being published in a Chinese edition from 2020. His latest book, Polyrhythmicity in Language, Music and Society, will be published by Springer in 2021.

He is a Fellow of the RSA; an elected fellow of Academy of Social Sciences; a member of All Souls Group, Oxford; and has recently joined the management group of the Institute for Advanced Studies in the Humanities at the University of Edinburgh.