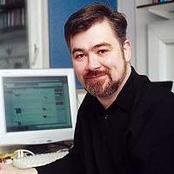 Rick Livesey's research relates to how a brain is made - by producing all of the different types of nerve cells in the correct places and at the appropriate times before wiring those nerve cells together to make functional circuits.

He studies how neural stem and progenitor cells build the executive centre of the mammalian brain, the neocortex. The neocortex is the part of the front of the brain that mammals, including humans, use to perceive physical sensations, sound and vision and where thoughts are generated and movement initiated. The consequences of mis-wiring in the cortex are neurological disease and disability, ranging from epilepsy to autism to major learning disabilities.

An understanding of how stem and progenitor cells build the cortex is essential for understanding these neurodevelopmental disorders and also for the development of stem cell-based therapies for neurological repair. The cortex is a mammal-specific structure, so the team also believes that studying how genes are used to build the cortex will help us understand the evolution of uniquely human abilities, such as language.

Rick's team have also developed an innovative way to study Alzheimer’s disease in the lab. The stem cell technique, which allows researchers to track the disease over a matter of weeks, could provide a valuable tool for scientists to unravel the complexity of Alzheimer’s and test potential new treatments, allowing the study of human brain development and disease in ways that were unimaginable even five years ago.