Founder and CEO at Second Home 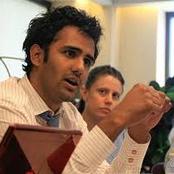 Rohan Silva co-founded Second Home. A members-club-style workspace for entrepreneurs and start-ups in Spitalfields which has attracted over 30 investors and nearly $11m funding.

In his former role as Senior Policy Adviser to the Prime Minister (until June 2013), Rohan Silva worked across all areas of government policy, with a particular passion for technology and innovation. He led the development of creative new approaches to policy making, including the application of behavioural economics to policy issues; the use of crowdsourcing models to generate ideas and open up the decision making process; and the harnessing of open data and government transparency to drive social and economic innovation. Rohan was also responsible for developing key policies to improve the environment for enterprise in the UK, such as the EIS tax changes announced in Budget 2011, the Entrepreneur Visa, the Hargreaves Review of Intellectual Property and the development of the Tech City cluster.

He left this role at the end of June 2013 to pursue interests in entrepreneurship and investment.

Rohan is a trustee of the Whitechapel Art Gallery and the Battersea Arts Centre, and serves on the advisory board of Nick Hornby's "Ministry of Stories". He is also a trustee of Entrepreneur First, the new private sector initiative to encourage more graduates to start their own business.

Rohan was previously Senior Policy Adviser for the 2010 General Election and Economic Adviser to the Shadow Chancellor George Osborne; prior to this, he was a 'Fast Stream' Policy Analyst at HM Treasury.

To read about Rohan's experience as a Policy Fellow in Cambridge see here.