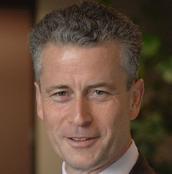 Robert Madelin is the Chairman of FIPRA International Ltd, where he brings to bear his direct professional experience in all things European Union, notably IT and life sciences, technology, research and innovation, health, trade and investment, food and drink.

Robert also sits on the International Advisory Council of Teladoc Health, Inc. He is a non-executive director at Médisanté Group AG and a consultant to PlusValue Advisory Ltd.

He was previously the Senior Adviser for Innovation in the European Commission. Before taking up this post in September 2015, Robert was the Director General of the DG for Communications Networks, Content and Technology (known as DG CONNECT, formerly Information Society and Media) in the Commission, where he was responsible for managing the European Commission's digital agenda. It was in this role that he became a Policy Leaders Fellow.

Robert served in a variety of postings in the EC. He was Director General for Health and Consumer Policies (2004-10), and between 1997-2003 he was Director in the DG for Trade, working on access to medicines, agriculture, biotechnology, corporate responsibility, food and product standards, global governance, intellectual property, investment, services, sustainable development, and relations with the Asia-Pacific. Prior to this, he was Deputy Head of Cabinet to Sir Leon (now Lord) Brittan, European Commission Vice-President.

Robert's role at the EC involved working with a number of senior policy makers on the question of how to best ensure that scientific advice has the appropriate visibility in the policy making process. Robert had been interested in this topic for some time, and contributed to projects such as the joint JRC-AAAS workshop on feeding scientific advice into policy-making; and the roundtable "Enhancing the Role of Science in the Decision-Making of the European Union", hosted by the European Policy Centre.

Born in 1957, Robert was educated in England (reading French and History at Magdalen College, Oxford), and then studied at the Ecole Nationale d’Administration in Paris. He joined the British Civil Service in 1979, serving mainly in London and then in Brussels (as First Secretary, External Relations, UK Permanent Representation to EC) before joining the Commission in 1993.