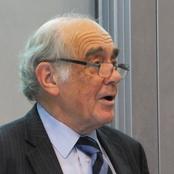 Sir Robin Buchanan Nicholson, FRS, FREng was a university and then industrial metallurgist, who served as Chief Scientific Adviser, Cabinet Office (1981-86). He then joined the board of Rolls-Royce plc, where he served until 2005. He was also a non-executive Board Member of BP plc and Pilkington plc.

Robin Nicholson studied natural sciences at St Catharine's College, Cambridge, gaining a BA in 1956, followed by a PhD in metallurgy in 1959. He was a fellow of Christ's College, Cambridge, from 1962 to 1966, and was made a lecturer in metallurgy at Cambridge in 1964, before becoming professor of metallurgy at the University of Manchester in 1966. He joined the European subsidiary of the nickel company Incoin 1972, initially to be the Director of its research laboratory, becoming a director in 1975, and managing director from 1976-1981.

From 1981 to 1986 Nicholson served as Government Chief Scientific Adviser in the Cabinet Office (from 1981 to 1983 within the Central Policy Review Staff). He was also a member of the Science and Engineering Research Council (SERC) from 1978–81, and a member of the UK Government's Council for Science and Technology (CST) from its inception in March 1993 to March 2000. He was elected a Fellow of the Royal Society in 1978.