Head of Bioinformatics at The Babraham Institute 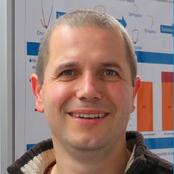 Dr Simon Andrews is the Head of Bioinformatics at the Babraham Institute. He did his first degree in Microbiology at the University of Warwick. After a brief period working for Sandoz pharmaceuticals he went on to do a PhD in protein engineering a the University of Newcastle with Harry Gilbert. During his PhD his interests moved from bench work toward the emerging field of bioinformatics, and he decided to follow this direction in his future career.

After completing his PhD Dr Andrews worked with the BBSRC IT Services where he developed and then presented a series of bioinformatics training courses in protein structure analysis to the BBSRC institutes. At one of these courses at Babraham he met John Coadwell who established the Babraham bioinformatics group and was then employed as the second member of the bioinformatics team. Since joining Babraham Simon has seen the group grow from two people to nine as the field has become far more prominent in the biological research community. He took over the running of the group in 2010.