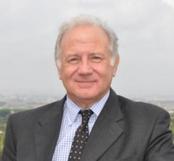 Professor Stephen Briggs holds visiting positions in the Department of Meteorology, University of Reading and the Department of Chemistry, Cambridge University. He is also a Fellow of University College London. He is Chairman of the Global Climate Observing System (GCOS) Steering Committee, a body set up by the UN to define and support observations for climate. He is also ad hominem Senior Adviser to the Chinese National Remote Sensing Programme and serves on the Advisory Board of the Global Terrestrial Network – Glaciers. He was until recently Head of the Department of Earth Observation Science, Applications & Future Technologies at the European Space Agency where he was responsible for the exploitation of ESA missions, for the future EO technologies programme and for studies relating to future missions. He was also the interface between ESA’s EO missions and its user communities in science, in government policy and in the private sector. Stephen has a 1st Class Honours BSc and PhD degrees in Astrophysics from University College London. There he worked in satellite-based spectrometry of faint galaxies before turning to satellite based Earth observation. He founded the first research group in the UK Natural Environment Research Council working in applications of satellite EO, eventually becoming Director of EO in NERC and in the British National Space Centre, prior to his joining ESA.