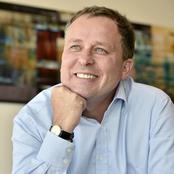 Graduating from Cambridge University with a degree in Natural Sciences, and with a PhD in Geophysics, Steven began his Barclays career twenty six years ago. Over this time he has held a variety of roles in Operations and Change across a range of business and support areas. His positions have included; Head of Risk, Head of Strategy and Planning, Head of Change, Chief Operating Officer for the UK Retail Bank, and most recently Strategic Transformation Director, and vice chair Barclays UK.

In his current role as Strategic Transformation Director, Steven is responsible for the Barclays award winning Digital Eagles initiative, which has resulted in over 16,000 members of staff in Barclays branches providing free technology help and advice to customers and non-customers. Whilst initially UK focused this extended internationally with a further 15,000 Digital Eagles across Africa and Europe. Steven and his team have pioneered the use of technology in branches, and were responsible for the implementation of free Wi-Fi across all 1,500 branches in the UK, and the deployment of 20,000 ipads to enable colleagues to service customers where and when they want.

Innovation has not come at the cost of customer accessibility as Steven’s team has overseen many initiatives that improve the way that customers can interact with Barclays. These include; talking ATMs; SignVideo, a technology that connects customers to British Sign Language interpreters in branch or at home and Barclays “Age Suit” which was developed for colleagues and customers to better understand the challenges faced by older customers with issues such as arthiritis, poor eye sight and general mobility issues. Last year, he oversaw the launch of Barclays Eagle Labs, pioneering the reverse of branch and corporate space offering access to resources such as 3D printers and laser cutters as well as training sessions and meeting space to benefit individuals, schools, community groups and high growth businesses.There are now 12 Eagle Labs across the UK with around 20 planned by end of 2017.

Steven's team has also been at the forefront of several industry leading initiatives, including driving forward transformation of cheque processing leading the cheque image Programme and lobbying government to change legislation to enable this. They also devised and rolled out the colleague to colleague secure app, Myzone, and the groundbreaking “Digital Driving Licence”, now used by almost 100,000 colleagues and individuals inside and outside Barclays. Most recently Steven has been leading the work to consider how Barclays best deploys Artificial Intelligence in a way that works best for customers, colleagues and the business. He is also a visiting professor of Technology, Behaviours and Information Strategy at Huddersfield University.