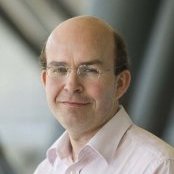 In October 2013, Tim Hubbard was appointed Professor of Bioinformatics and Head of the Department of Medical & Molecular Genetics at King's College London and Director of Bioinformatics for King's Health Partners with a part-time secondment as Head of Genome Analysis at Genomics England.

In 2018 he was also appointed as Associate Director (King's) for the Health Data Research London Site.

Previously, Professor Hubbard lead the Vertebrate Genome Analysis Project, which generates and presents core vertebrate genome annotation and maintains the reference genome sequences. He was also the Board of Management representative for Bioinformatics within the Institute. He also ran a research group which uses machine learning approaches to develop ab initio algorithms for vertebrate genome annotation such as large scale motif discovery.

Professor Hubbard held several positions at the Sanger Institute; he was a member of the strategy group that organised sequencing of the human genome as part of the international public consortium; he built up groups to analyse and annotate the sequences of vertebrate genomes and he developed an automatic annotation system that can be applied in real time to sequence output of the human genome project. The latter evolved into the Ensembl project which now provides annotation to more than 40 genomes.

Since 2007 Tim has also been the principal investigator of GENCODE, a scale up programme of the ENCODE project which brings together several research groups to generate the reference geneset for the human genome. He is also the Sanger Institute’s principal investigator of the Genome Reference Consortium, which is responsible for reference genome sequences of human and mouse.

Before joining the Sanger Institute Tim worked mainly on protein folding, classification and design. He co-founded the Structural Classification of Proteins database (SCOP) and developed algorithms to make protein structure predictions, assess their accuracy and calibrate the reliability of sequence alignment methods.