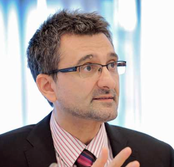 Vladimir Sucha is the Director General of the Joint Research Centre, which is the European Commission's in-house science service which employs scientists to carry out research in order to provide independent scientific advice and support to EU policy.

Prior to his role as Director General, Vladimir Sucha was Deputy Director-General of the JRC between 2012 and 2013. Prior to that, he spent 6 years in the position of director for culture and media in the Directorate-General for Education and Culture of the European Commission. Before joining the European Commission, he held various positions in the area of European and international affairs. Between 2005 and 2006, he was director of the Slovak Research and Development Agency; the national body responsible for funding research. He was principal advisor for European affairs to the minister of education of the Slovak Republic (2004-2005). He worked at the Slovak Representation to the EU in Brussels as research, education and culture counselor (2000-2004). In parallel, he has followed a long-term academic and research career, being a full professor in Slovakia and visiting professor/scientist at different academic institutions in many countries. He has published more than 100 scientific papers in peer reviewed journals.