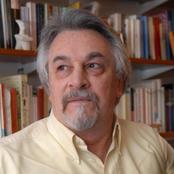 Guillermo A. Makin is an Argentine political scientist. He gained a First Class Honours Degree at Universidad del Salvador, Argentina, in 1976. His University of Cambridge PhD, completed in 1984, entitled Political Crises in Argentina: 1955 and 1975-76, led him to interview a large number of relevant political actors over the following 20 years. This body of original documentary material is the basis of his current project comparing Argentine institutional and political development on the 30th anniversary of the return of democracy. Makin specialised in relations between Argentina and the UK after the House of Commons Foreign Affairs Committee asked him to interview politicians in 1982-84. This is an on-going project. Makin is frequently consulted by the Argentine and the British media and has published numerous articles, papers and a book comparing presidential and parliamentary systems, Presidencialismo y Parlamentarismo: un estudio del caso británico (El Cid Editor). In the past he has held lectureships at the Universidad de Bologna (Buenos Aires) and the Universidad del Salvador and was appointed Professor by the Universidad de Belgrano in 2001.

Recent publications include ‘Los cambios en la Argentina democrática, 1983-2013’, a paper presented at a Round Table in London in December 2013, organised by the University of Notre Dame and the Kellogg Institute, and also available in a slightly altered text, in English, here. On British politics and the South Atlantic dispute with Argentina see ‘El triunfo de una nueva aristocracia: un modelo para pocos’, in Le Monde Diplomatique: Explorador, pp. 82-87, also at www.eldiplo.org.

Makin’s blog is at http://gamakin.blogspot.co.uk/