Life in the Anthropocene

Life in the Anthropocene

On 30 November 2021, CSaP’s Horn Fellows hosted an evening event for researchers and policy makers, in conjunction with the Cambridge Zero Policy Forum - a multidisciplinary community of academics from across the University of Cambridge, helping to tackle policy challenges posed by the transition to a net zero society. Howard Covington, Chair of the Alan Turing Institute, delivered the lecture and discussed the history of the Anthropocene, an unofficial term for the geological period we are currently living in, and his projections for the future. Dr Emily Shuckburgh, Director of Cambridge Zero, offered a reponse.

Covington argued that one of several driving factors behind our changing society within the Anthropocene will be artificial intelligence (AI), because of the progress we’ve seen within AI technology. He said that the number of parameters in natural language processing algorithms will be equal to the number of synapses within the human cerebral cortex within a couple of years. This might lead to direct interaction between AI algorithms and people in the emerging metaverse of avatars and holograms.

According to Covington, China is becoming a leader in AI technology. Surveillance in the forms of facial recognition software and monitoring digital currency transactions has allowed the country’s government to collect vast amounts of data on its citizens. This has enabled the institution of a social credit system which, depending on a person’s behaviour, automatically selects which type of individual deserves premium services, such as first-class train tickets. 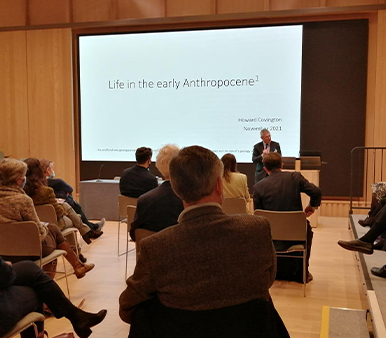 AI technologies, combined with climate change and diminishing biodiversity, mean that the world in the oncoming decades is going to look significantly different than it does now. Covington argued that we are witnessing a “geological transition” accompanied by a mass extinction event. In a mass extinction it is typical for many species to diminish (or become extinct), while other species take over. Covington’s provocative suggestion was that artificial intelligence algorithms may be a new rising ‘species’ and there is a risk that they might begin to control human affairs. This was supported by ideas that they are increasingly used to monitor important functions within the public and private spheres.

Covington explained that a geological transition might ultimately lead to a “deep global disruption”. He defined the scale of disruption by reference to the super-volcanic eruption that occurred 75,000 years ago and created Lake Toba in Sumatra. This caused temperatures to drop by about four degrees Celsius worldwide and initiated a volcanic winter that lasted around 10 years. Covington compared the risk of another eruption of the scale of Toba, which scientists estimate is one in 1,000 per century, to the risks of deep disruption caused by human activity. He concluded that the likelihood of humans causing a catastrophic event on this scale is uncomfortably high. 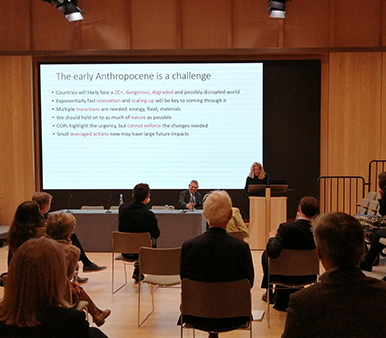 It was at this point that COP26 was reflected upon. Covington stated that the lack of effective action on the part of world governments came down to differing geopolitical and economic objectives. A comparison was made between the two largest greenhouse gas-emitting countries: the US and China. Although they are both innovative and resource-rich nations, they have drastically different social structures and values. The third major player, the European Union, has its own priorities and unique geographical problems. Covington argued that these differing viewpoints, along with other nations’ perspectives within the world, prevent nations coming together to solve climate change.

It was suggested that the ultimate deciding factor for helping to tackle climate change is economics. Covington explained that renewables will continue to become cheaper, leading to a significant reduction in the dependence on fossil fuels and coal. It was also proposed that hydrogen will be a major source of energy transmission and storage on the European continent and elsewhere, though it is not predicted to be effective until the next decade. He suggested the developed world will switch to electric vehicles very quickly. He expected that people will change their diets to synthetic food (meat, coffee and grains among others) as these become cheaper and as our global output of food falls short of demand. Covington also predicted that agribusiness will face major disruption. He thought carbon capture technology will expand rapidly. Furthermore, that we will rely more heavily on nuclear energy and the design and synthesis of new molecules and materials will be greatly accelerated by algorithms. Ultimately, the market will determine what needs to adapt and when.

To close the lecture, Dr Emily Shuckburgh, Director at Cambridge Zero, responded to Covington’s remarks. She summarised Howard’s thesis: it is exponentially fast innovation that’s going to “save us”, but she questioned whether that alone would be sufficient and cautioned on the need to consider unintended consequences. Dr Shuckburgh said it was hopeful to see just how quickly opinion has rallied around the limit of 1.5 degrees Celsius first raised in Paris, however expressed concern over the speed required for such a transition compared with the response to-date. She explained that Covington highlighted a “pretty bumpy road for the early Anthropocene” and asked the audience to consider taking their own individual actions, within their spheres of influence, to help lower the ‘bumps’. Ultimately, Shuckburgh concluded the discussion by highlighting that a global plan is necessary as the world is already witnessing the impacts of climate change, but she emphasised that as part of that there needs to be an open discussion on what future “we” want.

A panel discussion on child development, learning and mental health was chaired by Paul Kett, Director-General for Higher Education and Further Education at the Department ...

A ‘greenprint’ for net zero in UK transport by 2050

How can scenarios of climate change prepare us for uncertain futures?

In the second of the 2018 Climate Seminar series, Dr Renata Tyszczuk (Senior Lecturer in Architecture at the University of Sheffield) took the audience on ...