What do we mean by a Science Superpower?

What do we mean by a Science Superpower?

George Freeman MP, Minister for Science, Research, and Innovation delivered a CSaP Lecture at St John’s College, Cambridge where he discussed the UK’s position within global research and innovation. The talk on 28 April 2022 explored the mission of making Britain a “Science Superpower”, focussing on lessons learned from the 1950s golden age of UK science and engineering and the success of the “Cambridge Cluster”.

You can watch the lecture back here:

I feel very lucky to be a Cambridge man and it’s lovely to be back.

Freeman began the lecture by recalling how great it was to be back “home” in Cambridge, a place where he grew up, and a place he said, that “is shaping tomorrow and shaping the world.” He then provided some context surrounding the UK’s position within the global landscape of science and research. Freeman argued that after a turbulent two decades, the UK government cannot tax, borrow, or cut its way out of debt: instead, the UK must “grow its way out” by becoming a “global science superpower”. Freeman said this means generating a growth like the “high growth” happening in Cambridge; a city home to companies, sectors, and clusters growing up to 200% a year.

Freeman believes the UK is well positioned to becoming a science superpower. He said there is great commitment to achieving this goal from the Prime Minister, Chancellor, The Cabinet, and Whitehall. He explained that the Integrated Review published in 2021 is the embodiment of this shift away from the UK as a services-led economy, and towards the UK as a science and technology innovation driven-nation. Contained in this document is a pledge to increase UK research and development R&D spending from 1.7% to 2.4% of GDP by 2027. Freeman said this is a step in the right direction, and even if the UK achieved this target of 2.4%, this is merely the OECD average: adding that Switzerland spent 3.4% of GDP on R&D and the figure is 4.3% for Israel. He restated that meeting the OECD average is the first step towards becoming a global science superpower. 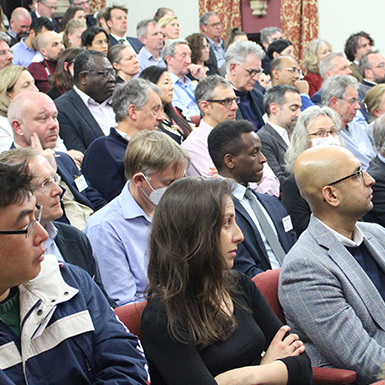 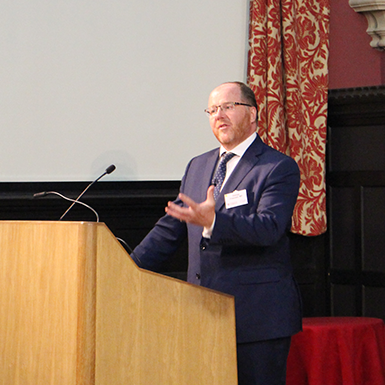 The past 10–15-year period has been a wake-up call, after a pretty complacent period after the end of the Cold War.

The talk then shifted to exploring the historical events that led to the recent Downing Street focus towards science and technology: the financial crash in 2007/8, Brexit, the COVID-19 pandemic and now the Ukraine War. Freeman explained that the UK is now in its third post-war economic cycle. He recalled that the 1950-1979 period was dominated by post-war reconstruction; 1979-2008 was a financial, city and service-led economic period, and now leaving the EU, has re-set our economic model. Freeman argued the need for a wake-up call. He said that the West (and UK) entered a period of complacency after the cold war ended in the 1980s. It was perceived that the free market had won, and liberal values had triumphed. Whereby, to succeed, all a country simply had to do is be a member of the good global market.

Freeman emphasised that the only way to address the political and economic stalemate, anger, division, and low growth is through investing in sustainable science technology and the “innovation of tomorrow”. He said the government has “decided to wake up and smell the coffee” pledging to create a more sustainable, less volatile, more resilient, and higher-skilled UK economy.

The second half of the lecture addressed the UK’s position within global science and technology and innovation. In that, moving from being a being global diplomatic military, to a science superpower, which he said means harnessing our longstanding science and technology expertise for the global good. Freeman added that we can unlock our home scientific expertise by connecting to global markets, where UK scientists are best positioned to solve the world's greatest challenges. He said through the creation, commercialisation, and industrialisation of innovative technologies, we can have tangible impact in driving climate change mitigation, harnessing the deep ocean and high space, even doubling world food production to feed nine billion mouths using half the amount of water and energy. According to Freeman, this is the true route to the UK attracting investment and becoming a science superpower.

You cannot be a science superpower if you are not an innovation nation.

Freeman provided a five-point definition of a science superpower. Firstly, a superpower begins with world class science. He argued the UK ought not be embarrassed about scientific excellence, and it should drive competitiveness and support winners. Secondly, a science superpower has a substantial hand in tackling international grand challenges for “the global good”. Third, is talent: recognising that science is collaborative and a force for bringing people together. This is important if the UK wishes to become a superpower on a fiscal shoestring: the UK cannot compete with China and the US’s billions of infrastructure investment. However, the UK can attract the best people. Fourth, is values. Meaning the UK must defend its historical legacy of conducting good science which entails critical thinking, criticism, peer-review, openness, and the sharing data. Fifth and finally, Freeman said the UK must attract a large proportion of global private R&D funding into the UK. He argued that this goal is achievable especially given the potential of the life sciences, space, fusion, quantum, and AI sectors.

The lecture concluded by Freeman arguing what the UK needs to critically do to become a science superpower and drive an innovation economy. He said thinking strategically, improving local leadership and being able to grow clusters around the country. He defined “clusters” as places where people take risks in pursuit of opportunities; from Norwich Agri-tech to Warwick robotics, to the North Wales future energy sector, and to the South Coast’s marine-tech. Freeman said by mapping those clusters - around 30 or more - means they can grow properly, and the UK can innovate en masse to become a global science superpower.

Soil Health in the United Kingdom

What would an agricultural soil plan for the UK look like and which measures would we use to monitor its effectiveness? Do we know enough ...

Future directions for innovation in agriculture

On 9 November the Cavendish Laboratory hosted the 6th Winton Symposium, focussing on energy storage and distribution. The Winton programme was set up to support ...