The benefits of play in middle childhood: what the research shows

On 9 April 2015 the Centre for Science and Policy hosted a workshop in Cambridge on behalf of the Economic and Social Research Council and Unilever, to explore what research evidence there is for the benefits derived from children playing in middle childhood. The workshop was attended by people from a range of backgrounds, including participants from academia, the charity sector, funding bodies, and both local and central government, bringing a broad range of experience and knowledge to the discussion.

Play for play itself

For children, play does not take place at a set time or in a set place. Going to school can be a playful time (even in the back of one’s parent’s car, and certainly on the bus), but it is less likely to be independently playful when children are accompanied to school rather than allowed to make their own way (Roberts H, 2015).

The workshop set out to assess the extent and strength of the evidence that is currently available and then consider where research effort could be productively focused to add new evidence to bolster this area, prompted by papers from Professor Helen Roberts and Dr David Whitebread. One of the themes that arose was the importance of research into play and playfulness that focuses on play as a worthwhile activity in itself, rather than solely as an instrument to achieve increased physical activity or other desirable outcomes. 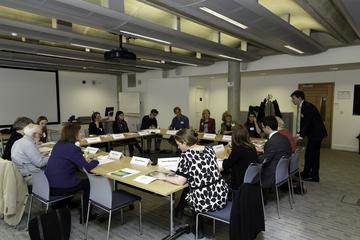 The difficulty of researching play

The discussion also considered the issues raised by the particular interpersonal nature of play and its inherent spontaneity. It was agreed that these factors make play difficult to examine experimentally and also pose problems for scaling up effective play interventions, where an important but unobserved factor is not included when the intervention is used more widely.

The workshop provided a valuable opportunity for knowledge exchange and created new connections between people interested in this area of research, which could lead to future collaborations. The discussion will be written up and shared between the workshop participants.

What makes a successful research culture?

A CSaP Policy Workshop organised in collaboration with the Higher Education Funding Council for England (HEFCE) explored research cultures, how they are formed and what ...

The benefits of play in middle childhood: what the research shows

On 9 April 2015 a workshop was held at the Faculty of Education and Homerton College to discuss what is known about the benefits of ...

The future of medical imaging

Medical imaging technologies are advancing at an unprecedented rate, providing a challenge for NHS England to keep up to date with the latest developments.