Head of Innovation and Partnerships at Commonwealth Secretariat 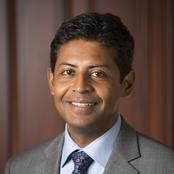 At the Commonwealth Secretariat - the inter-governmental organisation for 52 member countries spanning Africa, Asia, Europe, the Caribbean and Oceania regions - Abhik is responsible for fostering innovation and multi-sectoral partnerships to address the most critical public policy and developmental challenges in Commonwealth countries. Previously he was Head of Policy and Research with a particular focus on the development of young people who comprise more than 60 per cent of the Commonwealth’s population of 2.3 billion. In this role, Abhik supervised research and developed policy guidance on education, health, employment, entrepreneurship, inclusion, skills and sustainable development. He also worked in partnership with the governments of Commonwealth countries to develop evidence-based national policies and collaborated with other international development organisations to improve policy frameworks, monitoring and evaluation. Abhik is the lead author of the Global Youth Development Index and Report 2016, a groundbreaking evidence-based study on the state of young people in the world. The United Nations Human Development Report Office has called the study an “admirable and timely contribution to fill a critical gap in the global development landscape.”

Abhik has also been a Managing Editor at The Economist Group as well as an analyst and newspaper editor in India. His analysis and commentary has been featured in The Economist, BBC, Guardian, The Times, Bloomberg and The Asian Age, among others. Abhik is a trustee at Apples & Snakes, the leading national organisation for poetry and spoken word artists in the UK. He was educated in India and the UK and is a World Fellow at Yale University.