Clinical Lecturer in Virology at Department of Pathology, University of Cambridge 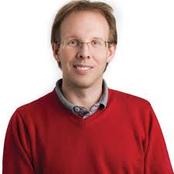 Chris Smith is a medical consultant specialising in clinical microbiology and virology at Cambridge University and its teaching hospital, Addenbrooke's. He is also a Fellow Commoner at Queens' College, Cambridge.

Chris also created the Royal Society of Chemistry's "Chemistry World" and "Chemistry in its Element" podcasts, he founded and presented the first 100 episodes of the Nature Podcast for the journal Nature, and he has since also launched "The eLife Podcast" for the eLife open access online journal.

Chris has also published 4 popular science books internationally, one of them - Crisp Packet Fireworks, which has become a best-seller and been translated into multiple languages - co-authored with fellow Naked Scientist Dave Ansell.

Living just outside Cambridge with his wife, Sarah, who is a local GP, Chris has two children, Amelia and Tim, both of whom are showing promise as future broadcasters; well, they talk a lot anyway... (where do they get that from?!)