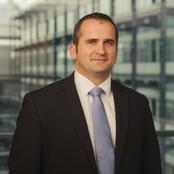 Craig has a particular interest in climate change impacts on emerging economies and in the integration of climate resilience into investment planning across a range of sectors (infrastructure, water, power and energy, manufacturing and financial services). He is also actively involved in a number of international climate finance mechanisms such as the Climate Investment Funds and the Global Environment Facility.

He joined EBRD in 2006 having previously worked at the UK’s Department for International Development (DfID). He completed his PhD in Environmental Technology at Imperial College London in 2001.

To read about Craig's experience as a Policy Fellow in Cambridge see here.