Director at The Bell Foundation 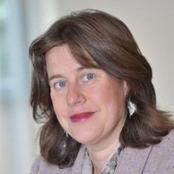 Diana Sutton is Director of the Cambridge-based education charity The Bell Foundation. The Bell Foundation started in 2011 and works to overcome exclusion through language education. The Bell Foundation works with partners to support people who have English as a second or additional language. The first of their two programmes focuses on children from families who have emigrated to the UK, and also those born in the UK, who speak English as an additional language working principally with schools, university and charity partners. Their second programme helps prisoners with language and literacy needs and works with partners organisations working in the prison estate and within the community.

Diana joined The Bell Foundation in 2011 as its founding Director, following many years’ experience working in children’s charities in public policy work. She previously worked with the NSPCC, first as Head of Policy and Public Affairs, and then as Head of Public Affairs and Campaigns. She also worked in Brussels as the Head of EU Advocacy for Save the Children, and in the European Parliament for the Disability Intergroup Secretariat. She also volunteered as a Trustee for the Children's Rights Alliance for England for six years.