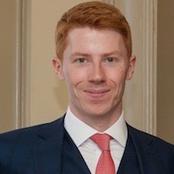 Euan works at the British Embassy Tokyo as part of the Asia-Pacific Digital Trade Network. He previously worked in the Security and Online Harms Directorate in DCMS.

He previously worked in a range of roles in the Cabinet Office. Prior to joining the Civil Service, Euan completed the Teach First leadership development programme, teaching English and Politics in a secondary school in west London. He also worked at an education charity, supporting the setting up of new schools.