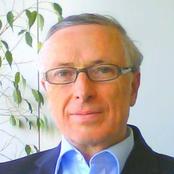 Dr Florent Frederix previously had the responsibility of developing an industrial cybersecurity strategy for Europe. In addition he was responsible for a portfolio of research and innovation projects in the domain of cyber security.

Before joining the cyber security team, he was Head of the RFID Sector from 2006 to 2012 at the European Commission. This sector was responsible for the RFID policy and the emerging Internet of Things. Since January 2012 he has also been Editor-in-Chief of the International Journal of Advanced Logistics.

In his 20+ year career before joining the EU Commission he held positions in industry. For over 10 years he was Research Programmes Manager at Alcatel and in that role he contributed as initiator of some of the more important projects, to Alcatel's success in ADSL (broadband over telephone). Prior to joining Alcatel in 1991, Florent was also research and development coordinator of the team that developed the AESTHEDES computer aided design system for pre-press applications.

Florent holds Master of Science, Master of Business Administration and PhD degrees and has an educational background that spans Electronics, Computer Science and Economics.

To read about Florent's experience as a Policy Fellow in Cambridge see here.