Consultant in Public Health at The PHG Foundation 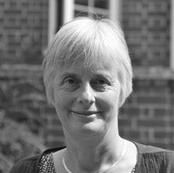 Hilary Burton, a founding member of the PHG Foundation, was Director from 2010 to 2017. She is a highly experienced public health physician who believes that genomic science can, and should be used by public health professionals alongside the social and environmental determinants of health to bring about improvements in population health. Her special interests include the integration of genomics within mainstream medicine, genetics education for health professionals, and genomics and the developing world.

Hilary trained at St Hugh’s College and The Radcliffe Hospital, Oxford and became a consultant in public health medicine in 1993. She was a member of the Department of Health’s Human Genomics Strategy Group and currently serves on the Joint Committee of Medical Genetics of the Royal Colleges and the Council for the British Society of Human Genetics. She is a Fellow of Hughes Hall, Cambridge, and holds an Honorary Lectureship at the University of Cambridge.

Hilary is currently leading PHG Foundation’s flagship project My Healthy Future which aims to set out a vision of personalised healthcare in 2040.