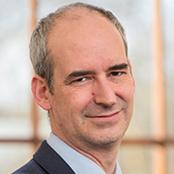 James Bowler was appointed as Permanent Secretary of the Treasury in October 2022. He will have overall responsibility for managing the department, will supervise Treasury policy development, and will be the principal adviser to the Chancellor and his Ministerial team

James Bowler was Permanent Secretary of the Department for International Trade (DIT) on 16 August 2021.

Prior to joining DIT, James served as Second Permanent Secretary of the Cabinet Office leading the COVID Taskforce from October 2020. In this role, he was responsible for the management and leadership of the taskforce that set out the government’s strategy to tackle the pandemic and its impacts. Prior to that he served as Director General of Policy, Communication and Analysis in the Ministry of Justice, 2020.

For much of his civil service career, James has worked at the Treasury. He served as Director General for Public Spending (2017 to 2020), Director General for Tax and Welfare (2015 to 2017) and Director for Strategy, Planning and Budget (2012 to 2015). Across these roles, he oversaw key policy areas such as the preparation and allocation of the Budget, spending and tax policy.

He was appointed a Companion of the Order of the Bath (CB) in the 2012 New Year Honours.