Research Associate at Department of Physics, University of Cambridge 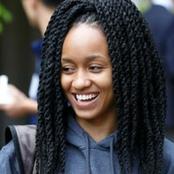 Jerelle grew up in the island of Dominica, in a village called Vieille Case. In 2012, she graduated from the University of the West Indies with a BSc. in Chemistry and Mathematics. She then pursued an MPhil. in Chemistry at the UWI, under the supervision of Prof Sean McDowell. In 2018, she completed her PhD in Chemistry (Department of Chemistry, Cambridge) under the supervision of Prof David Wales FRS. For her PhD work, she developed and tested computational methods to study protein folding. In particular, she worked on a coarse-grained model for proteins, developed an approach for sampling large-scale rearrangements in proteins, and characterised a disordered receptor protein implicated in HIV infection. She recently joined the group of Dr Rosana Collepardo-Guevara (Department of Physics, Cambridge) as a research associate; focusing on developing models to probe genome organisation.

Jerelle is the founder of CariScholar, a non-profit organisation aimed at connecting Caribbean students with some of the region’s most prolific and accomplished academics and professionals, in order to foster mentorship, sharing of information and guidance.