Professor at Department of Computer Science and Technology, University of Cambridge 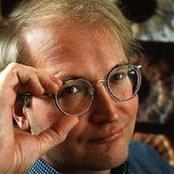 Professor John Daugman’s research focuses on statistical pattern recognition, computer vision, decision theory and neural computing. One development and outgrowth of this research has been iris recognition, an automatic and rapid method for determining a person’s identity with very high confidence, by mathematical analysis of the random patterns that are visible in the iris of an eye.

Professor Daugman’s algorithms for this process have been licensed internationally and are the basis of all current publicly deployed iris recognition systems. Amongst other locations, these systems are currently being used in some airports, where governments including that of the UK, allow the process to be substitute for a passport.

He received his AB and PhD from Harvard, where he went on to teach on the Faculty. Before coming to Cambridge he held the Toshiba Chair at the Tokyo Institute of Technology, Japan, and during 2002-2004 he was the Johann Bernoulli Professor of Mathematics and Informatics at the University of Groningen in The Netherlands.

Along with his OBE, which he received in 1999, he has also been awarded the 1997 Information Technology Award and Medal of the British Computer Society, the 2000 Technology Innovation Award of the US Smithsonian Museum and the UK Design Council “Millennium Product” award, for his work on iris recognition for personal identification.