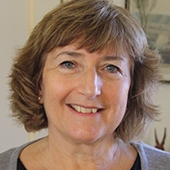 Professor Madeleine Arnot is a Professor of Sociology of Education in the Faculty of Education at the University of Cambridge. She is a Fellow of the Academy of Social Sciences, and a Professorial Fellow and Director of Studies (Education) at Jesus College Cambridge. She is co-founder with Professor Loraine Gelsthorpe of the Cambridge Migration Research Network (CAMMIGRES), funded by the Vice Chancellor’s Endowment Fund.

Her primary interest is in the development of sociology of education and in particular in the role of education in relation to social inequalities and the promotion of social equality and the promotion of democratic citizenship. She is internationally known for her work on socio-cultural reproduction theory, her use of Bernstein's theory of pedagogy in relation to gender and education and pupil voice, and recent youth, gender and citizenship research in the Global South.

She began her career as part of the Schooling and Society team at the Open University, focussing specifically on social class issues. Since the 1980s she developed theories of gender codes and schooling focusing on the history of co-education, the curriculum, family and schooling, youth cultures and identities. In 1996-7 she co-directed an Equal Opportunities Commission project on gender equality reform and co-directed an OFSTED commissioned project reviewing research on gender and educational performance. She has been consulted on the development of equal opportunities policy in education internationally by: the Ministry for the Advancement of Women, Luxembourg; the Ministry of Education and Science and the Ministry of Culture and Education, Argentina; the Ministry to the Presidency, Greece; and, the EC Project on Teacher Training: Ministry for Equality between the Sexes, Portugal. She advised the Department of Education and Science on citizenship education, and was a member of expert research assessment panels on democratic values, gender and education for the Swedish Research Council and for the Equality Centre at University College Dublin.

In 2004 she established the Research Consortium on the Education for Asylum-Seeker and Refugee Children with the General Teaching Council, the National Union of Teachers and the Refugee Council and co-authored in the prize-winning book Education, Asylum and the Non-Citizen Child: the politics of compassion and belonging. She recently co-directed the Bell Foundation funded project on ‘School Approaches to the Education of EAL students: language development, social integration and achievement’ which is now in its second phase. Her current research interests include issues relating to European migration and education and the impact of migration on professional knowledge and practice.