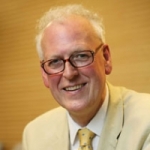 Lord Peter Hennessy is the Attlee Professor of Contemporary British History at Queen Mary, University of London. He started his career as a journalist, writing for The Times as a leader writer and Whitehall Correspondent, The Financial Times as its Lobby Correspondent a Westminster, and The Economist for over twenty years. He also presented the BBC Radio 4 Analysis programme.

In 1986 Peter Hennessy co-founded the Institute of Contemporary British History, and in 1992 he moved from journalism to academia at Queen Mary. His research interests include Prime Ministerial and Cabinet government, the British constitution, Cold War Britain, the Bomb, and nuclear submarines. He was appointed a cross-bench member of the House of Lords in 2010.