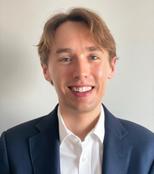 Joseph leads fisheries and digital trade in the Cabinet Office's EU Secretariat, where he advises Rt. Hon. Lord Frost CMG and supports the coordination of trade policy across government. He also works on the governance of the Trade and Cooperation Agreement (TCA), particularly matters affecting trade.

Prior to the Cabinet Office, Joseph was Head of Australia and Emerging Technologies in the digital trade team at the Department for Digital, Culture, Media and Sport (DCMS). As the department's Head of EU Negotiation Strategy until December 2020, he negotiated the digital trade title of the TCA and wrote a section of the May government's Chequers white paper. Joseph has been a private secretary to the Minister for Digital and has completed secondments to Sweden’s foreign ministry and the cabinet of a European Commissioner.

Joseph holds a degree in German and history from King's College London. While at DCMS, he was a permanent delegate to Chatham House.