Director of Strategy at Institute for Apprenticeships and Technical Education 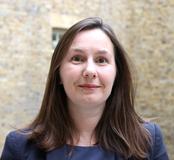 Strategy Director at Institute for Apprenticeships and Technical Education

Rachel Cooper is Director of Strategy at the Institute for Apprenticeships and Technical Education – as a jobshare partnership with Beth Chaudhary.

Previously, Rachel was Strategy Director for the Cabinet Office, where the role supported Ministers and the Permanent Secretary on the Cabinet Office’s future direction, performance and delivery. Prior to this appointment, they were the first Principal Private Secretary jobshare in the Civil Service, working to John Manzoni - Chief Executive of the Civil Service and Permanent Secretary of the Cabinet Office. Rachel has held a number of roles in BEIS and DECC leading on energy policy including tackling fuel poverty, energy efficiency in homes and most recently on smart energy – together with Beth, they led on the Smart Systems and Flexibility Plan (2017) which set out Government’s ambition for a smart electricity network to support a low carbon future and has a road map for the current energy agenda.