Professor of Computational Linguistics at Department of Computer Science and Technology, University of Cambridge 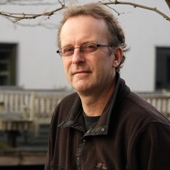 Professor Ted Briscoe is Professor of Computational Linguistics at the Computer Laboratory in the University of Cambridge, where he has been a member of staff since 1989. His broad research interests are computational and theoretical linguistics and automated speech and language processing. He directed and was heavily involved in the teaching of the MPhil in Computer Speech, Text and Internet Technology, taught jointly with the Engineering Department.

From 1990 until 1996 he was an EPSRC Advanced Research Fellow undertaking research at Macquarie University in Sydney, University of Pennsylvania in Philadelphia and Xerox European Research Centre in Grenoble, as well as at the Computer Laboratory.

He has published over 70 research articles, edited three books, and been Principal/Co-Investigator or Coordinator of fourteen EU and UK funded projects since 1985. He is joint editor of Computer Speech and Language and on the editorial board of Natural Language Engineering.