Research Associate, Centre for Smart Infrastructure and Construction (CSIC) at Department of Engineering, University of Cambridge 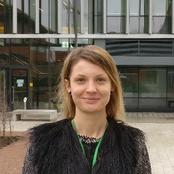 Timea is a Research Associate at the Centre for Smart Infrastructure and Construction (CSIC), Department of Engineering, University of Cambridge. She holds a PhD in Local Government Studies (Public Administration), and an MSc in Architecture and Engineering. Her research interests include urban and network governance, smart urbanism, and evidence-informed decision-making.

Her current research investigates the complex interplay between digital technologies and urban governance in infrastructure planning and management. She is responsible for leading the governance stream of the “Digital Cities for Change” Programme, funded by The Ove Arup Foundation. In addition, she has also been contributing to developing a City-scale Digital Twin of the Cambridge city region as Early Career Researcher at the Centre for Digital Built Britain.

Prior to joining CSIC, she conducted research into the ways in which modelling tools can support whole-systems energy decision-making in the multilevel governance context of the UK. This work built on Timea’s doctoral research at the University of Birmingham, in which she developed a novel theoretical framework and methodology (combining network and discourse analysis) to investigate the role of governance networks and stakeholder management in facilitating low-carbon energy transitions in European cities.