We can treat disease purely using electricity. There are no drugs involved.

On 10 June 2022, researchers from the University of Cambridge's Bioelectronics Laboratory guided this year’s CSaP Policy Leaders Fellows on a tour of their cutting-edge facilities, demonstrating how recent advances at the interface of electrical engineering and clinical neuroscience have the potential to transform treatment approaches across healthcare.

PhD students Ben Woodington, Elise Jenkins, and Santiago Velasco-Bosom from the Bioelectronics Laboratory – which is led by Professor George Malliaras – introduced the Fellows to the history of bioelectronics, before discussing the different aspects of this research at Cambridge and giving examples of particular devices that are already deployed in the clinic. The Fellows examined new prototypes in the lab and asked questions, including about relevant ethical considerations and how to encourage better translational research in the UK. 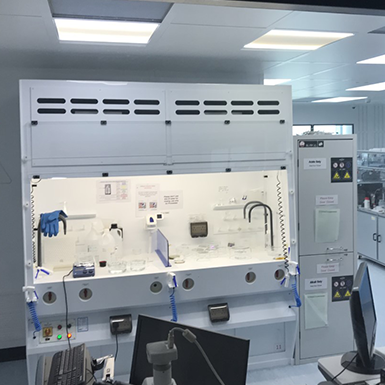 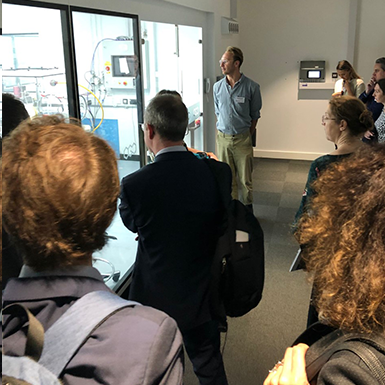 Woodington first explained that bioelectronics – the study of how electronics can interface with living systems – can be traced back to Luigi and Lucia Galvani’s discovery in 1780: that the muscles in a dead frog’s legs twitch on the application of an electric current. It was the invention of the fully implantable pacemaker in 1958, however, that highlighted the importance of medical applications in bioelectronics. A key aim of modern bioelectronics is the creation of "minimally-invasive" devices that deliver treatment without significantly harming the human body, unlike major surgery or strong chemical medications.

The human nervous system is, broadly, an extremely complicated set of electronic pathways. Bioelectronic devices allow doctors to interact with these pathways to reduce patients’ pain, mitigate disease, or help them to control mechanical devices with their mind. For example, deep brain stimulation has been shown to reduce limb tremors for people with Parkinson’s disease.

In the lab, the Fellows were shown devices – designed by Cambridge researchers – that can be implanted just under the skin and send electronic pulses to the spinal cord to neutralise pain signals, relieving lower back pain. They also saw non-invasive devices which can strap to the remaining parts of an amputated arm, "reading" the muscle signals in the upper arm and sending them to a prosthetic limb. This technology enables patients to better learn how to move the prosthetic limb - just like a biological one.

How does this technology end up in the NHS?

While acknowledging the benefits of the Cambridge biotech ecosystem, the PhD students emphasised the challenges that bioelectronics researchers face when trying to develop their research beyond the lab. Many of the device components are very specialised and difficult to manufacture. Some of the flexible materials are four micrometres wide – about 12 times thinner than a human hair. Tools that repeatedly interact with the nervous system must be carefully designed for “biocompatibility” so that the human immune system does not reject them. The researchers also explained that, due to a lack of UK manufacturing capability in this space, devices are often built abroad, which increases transport and regulatory costs. Nevertheless, many of the PhD students and post-doctoral researchers have founded their own start-up companies to help develop these technologies. Some are even on innovative commercialisation fellowships, which fund their research to help build translational expertise within UK centres of scientific excellence.

Are there wider uses for this technology. Can it change behaviour?

The Fellows also discussed ethical concerns in relation to bioelectronic intervention. The researchers drew a distinction between “read” technologies, like the prosthetic arm device which do not alter human brain patterns, and “write” technologies, such as the system to reduce Parkinson’s-induced tremors which do modify human neural activity. While the latter clearly has strong healthcare benefits, participants did note that primitive “lie-detector” neurotechnologies have already been developed and further advances could risk compromising human autonomy.

The technology is already here. It works and it’s only going to get bigger.

Overall, the researchers highlighted that research in bioelectronics has already produced impressive, practical technologies that are deployed in healthcare settings and that there is significant potential for these devices to become a much more important part of medical treatment in the UK in the coming decades. Given this, they emphasised that building firm strategic and regulatory frameworks are increasingly important goals for UK science policy. These can help to address ethical concerns, anticipate future manufacturing needs and better facilitate translational research at scale.

The new Policy Fellows in Easter Term 2013 have been announced.

Following a workshop earlier this year, the Centre for Law, Medicine and Life Sciences (Faculty of Law, University of Cambridge) together with CSaP published a ...

An international workshop on climate change and clean energy

CSaP was delighted to partner with the Renewable Energy and International Law network and the Global Sustainability Institute at Anglia Ruskin University for a two-day ...